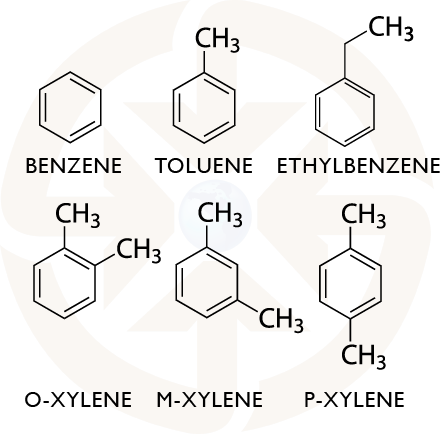 Benzene is a colorless and highly flammable liquid with a sweet smell that is moderately water soluable. It is one of the most widely used chemicals in the world. Benzene is a powerful industrial solvent and is used in the creation of a variety of organic chemicals, plastics, polymers and rubbers, paints, and adhesives. Benzene is released into the air via combustion of fuels such as gasoline, wood, and coal. Primary sources of benzene leaks to groundwater and soil include: industrial discharges, landfill leachates, leaky underground storage tanks (gasoline), and hazardous waste sites.
For the general population, the primary sources of benzene exposure are the inhalation of primary and secondary tobacco smoke, as well as the inhalation of contaminated air at gas stations and in high automotive traffic areas.

Also known as methylbenzene, toluene is a colorless, highly flammable liquid with a strong, solvent-like smell that is widely used as a solvent in industrial processes. Toluene is used in making paints, paint thinners, fingernail polish, lacquers, adhesives, and rubber and in some printing and leather tanning processes. It is used in the production of benzene, nylon, plastics, and polyurethane and the synthesis of trinitrotoluene (TNT). It is also added to gasoline along with benzene and xylene to improve octane ratings. Toluene is also used in the hemoglobin extraction process.

The primary route of exposure for the general population is from inhalation of vehicle exhaust; however, the use of paints, varnishes, lacquers, shoe polishes, and cigarette smoke can contribute to levels indoors and personal exposures. Toluene evaporates rapidly from these materials and becomes mixed with the ambient air.

Ethylbenzene is a colorless liquid with a distinctly gasoline-like small. It evaporates at room temperature and burns easily. Ethylbenzene is primarily used for the manufacturing of styrene and ultimately polystyrene. Ethylbenzene is also found in gasoline, paints, inks, pesticides, glue, varnishes, tobacco products, and automotive products.

Releases of ethylbenzene into the air occur from burning oil, gas, and coal and from industries using ethylbenzene. Higher levels of ethylbenzene may be found in private residential wells near landfills, waste sites, or leaking underground fuel storage tanks.

Xylene is a collective term used to describe the three isomers of dimethyl benzene; meta-xylene, ortho-xylene, and para-xylene. It is a colorless, flammable liquid with a notably sweet odor. Xylene is mainly used as a solvent in the printing, rubber, and leather industries. Along with other solvents, xylene is also widely used as a cleaning agent, a paint thinner, and in varnishes. Xylene is also used in small amounts in gasoline and airplane fuels.

Xylene is primarily released from industrial sources, in automobile exhaust, and during its use as a solvent. Hazardous waste disposal sites and spills of xylene into the environment are also sources of exposure. The general population may also come in contact with xylene from a variety of consumer products, including: gasoline, paint, varnish, shellac, rust preventives, and cigarette smoke.

Got a BTEX Remediation Project on the Horizon?

If you are tackling a challenging remediation project, GWTT has the solution. We will design/build (and operate, if desired) a treatment system to meet your exact project requirements.

1. Air Stripping – Air stripping is the transferring of volatile components of a liquid into an air stream. Volatile compounds have relatively high vapor pressure and low aqueous solubility characterized by the compound’s Henry’s law coefficient, which is the ratio of the concentration in air that is in equilibrium with its concentration in water. Pollutants with relatively high Henry’s Law coefficients can be economically stripped from water. There are two types of commonly utilized air stripping technologies:

a) Packed Tower – Packed towers use a distributor placed at the top of the tower to evenly distribute engineered plastic, ceramic, or metal packing to maximize air-water contact. Packed towers remove 99% of volatile organic compounds due to their high Henry’s constant and the high air-water surface contact of the system. Packed strippers also work more efficiently in removing lower volatility organic compounds than tray strippers. Towers can be between 5 to 12 meters in height and are typically permanent installation

b) Shallow Tray – Sieve tray towers use a similar process to packed towers, but instead of packed materials being evenly distributed, the materials are separated into several trays with holes that allow water to drip through them. An electric air compressor is typically positioned at the bottom of the system where the air from the fans travels through the holes and becomes exposed to the water to remove less volatile substances.

2. Liquid Phase Granular Activated Carbon – Adsorption is a process where a solid is used for removing a soluble substance from the water. Water is pumped in a column which contains active carbon, this water leaves the column through a draining system. The activity of an active carbon column depends on the temperature and the nature of the substances. Water goes through the column constantly, which gives an accumulation of substances in the filter. For that reason the filter needs to be replace periodically. A used filter can be regenerated in different ways, granular carbon can be regenerated easily by oxidizing the organic matter.

3. Advanced Chemical Oxidation – Advanced chemical oxidation processes make use of (chemical) oxidants to reduce both organic and oxidizable inorganic components such as BTEX. The processes can completely oxidize organic materials to carbon dioxide and water, although it is often not necessary to operate the processes to this level of treatment

A wide variety of advanced oxidation processes are available: 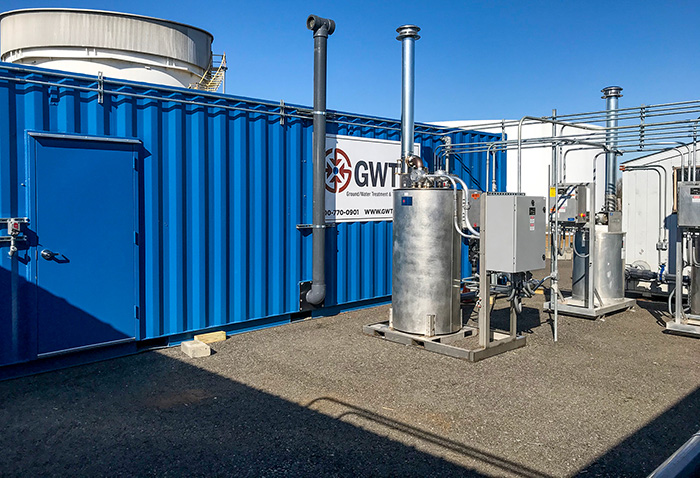